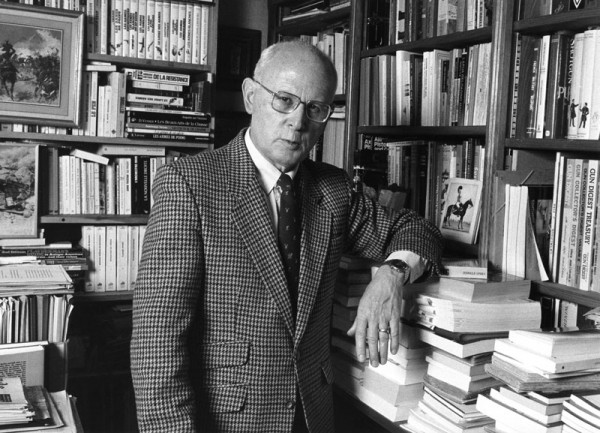 My article on the late Dominique Venner (1935 – 2013) has appeared at The Sydney Traditionalist Forum in three parts (here, here, and here), handsomely presented by the Forum’s convener, Edwin Dyga, whom I would like to thank publicly for his care and thoroughness in the matter.  Venner, whose death took the form of a ghastly suicide in the Cathedral of Our Lady in Paris, was a founder of the French New Right and a prolific author of articles and books.  As far as I can tell, only  one of Venner’s books is available in English, The Shock of History (Arktos 2015), which seems to be based on material for his last book to be published in French, Un Samouraï d’Occident: Le Bréviaire des insoumis (Pierre Guillaume de Roux 2013).  I have addressed, in the article, Venner’s Histoire et tradition des Européens: 30,000 ans d’identité (Éditions du Rocher 2002), summarizing and commenting on its overarching thesis: Namely that there is an indubitable, traceable, coherent European Identity whose basic motifs can be followed back through Medieval and Classical history into the archeology of prehistory and finally to the cave-paintings at Chauvet, which science now dates to 30,000 years ago.  The Histoire also contains a potent double critique of modernity and liberalism comparable to similar critiques undertaken in the Twentieth Century by such as René Guénon and Julius Evola.

Part I of the article explores the possible motives and the meaning – or lack of motive – of Venner’s self-destructive act; Part II concerns itself with Venner’s oeuvre, especially the Histoire.  Part III deals with the grossly hypocritical journalistic reaction to Venner’s demise and attempts to set his work in a larger Traditionalist context by showing how its argument often converges what one might call Christian Traditionalism.  I argue, for example, that passages from Father Seraphim Rose on the topic of nihilism could be traded with passages by Venner on the same topic, and that the switch would be undetectable.  I am, finally, an advocate for Venner’s work, which I would like to make available to an English-language audience.

2 thoughts on “The Pagan Ordeal of Dominique Venner”