“The attack on the Jew . . . is an attack on Christianity itself and on the Judeo-Christian basis of our Western civilization.”

The notion that Western civilization rests on a Judeo-Christian basis is very largely an invention of the 1940s, when Jews felt a sudden and unprecedented desire to join the Western club and lock arms with their Christian “brothers.” Although a palpable oxymoron, the phrase prospered in the years that followed, and is now well established as one of the hardier weeds in the unlovely garden of American political cant.

Obviously, there can be no such thing as Judeo-Christian values when Jews specifically reject the highest Christian value, which is Christ.

We might go so far as to call Judeo-Christian values a canard, and say that this canard serves mainly to de-divinize Christ, and thus dissolve Christianity into a purely ethical system. Curiously, the solvent power of this canard is somehow neutralized when it comes to doctrines that are distinctly Jewish. I would add that the canard also serves to reconcile Christians to the fact that they nowadays receive so much of their moral, political and theological instruction from strongly self-identified Jews.  Curiously, the respect that Jews feel for the teaching authority of strongly self-identified Christians remains as low as ever.

What this suggests is that modern Judeo-Christianity is Christianity made acceptable to Jews.  It does not seem to involve reciprocal modifications to Judaism.  Indeed, the basic Judeo-Christian condominium would seem to be that Christians shall say only nice things about Jews, while Jews shall go on gifting Christians with their withering criticism.

Before 1940, historians used the phrase Judeo-Christian to describe sects of Christianized Jews, such as the Ebionites and Nazarenes, which briefly flourished in the early days of the faith.  In his History of the Origins of Christianity (1888), for instance, Ernest Renan used the adjective to denote Jews who accepted Jesus as the Messiah, but who continued to observe the Mosaic Law and held themselves aloof from the gentile Church (in other words, these Judeo-Christians were the people Paul was really talking about in Galatians 3:28).

These Judeo-Christians also dissented from the emerging Trinitarian doctrine of the orthodox Church, denied that Jesus was divine, and seem to have taught that he was a prophet, an angel, or some sort of ghostly apparition.  Renan suggests that they esteemed Jesus in much the same way as he would later be esteemed in Islam, which Renan called “a sort of Arab prolongation of Judeo Christianity.”

The Judeo-Christian sects were persecuted and destroyed by orthodox Jews, who abominated Jesus as the grossest of blasphemers, and who likely harried from their synagogues anyone who said he was anything less than a very wicked man.  Thus, Renan tells us,

“Orthodox Judaism could not curse the minim [Judeo-Christians] with sufficient bitterness.”

Indeed, he argues that such a curse was added to the highest Jewish prayer, the Amidah, at just this time; and that the “heretics” that Jews still ask Yahweh to destroy are none other than these Judeo-Christians of yore.

I should add that Renan admired these early Judeo-Christians because he saw them as precursors to his own humanitarian religion.  Like “Jesus People” and Unitarians in every age, Renan believed that the pure Gospel of Jesus had been corrupted by Paul, but that beneath all the subsequent encrustations of myth and metaphysics, one could still discover a merely human and historical Jesus.

As I said a moment ago, modern Judeo-Christianity is a canard invented to ease the assimilation of strongly self-identified Jews into a society that retains some large vestiges of Christianity.  Canard, by the way, is what a Frenchman calls a duck (or more properly a drake), and metaphorical canards therefore spread through society in the same way that quacking spreads through a paddling raft of ducks.  One duck quacks and all the others repeat it.

It doesn’t mean a things.  That is just what canards do!

This is certainly how I began quacking about the Judeo-Christian basis of Western Civilization.  It is what I heard from all the other quacks

But we may deduce from the disappearance of those early Judeo-Christians that this quackery cannot last.  Serious Jews understand this, and therefore see Judeo-Christianity as nothing more than a useful canard.  They will quack it, to be sure, but they do not for a moment believe it.  I earlier likened this canard to a hardy weed, but orthodox Jews seem to look upon it more in the way of very useful vegetable.

In 1894, a Rabbi named Frederick Cohn addressed a large congregation in the Odd Fellows Hall in El Paso, Texas, his topic being the incomparable debt the world owed to Israel. He listed Christianity among the blessings bestowed by Israel, saying of the former that it “was really Judaism at work in the pagan world.”  Thus, “of the Graeco-Roman, the Teutonic German, and the Judeo-Christian ideas, it is the later that has done more for the world than any other agency known to history” (1).

This train of thought was set in motion by a couple of announcements that popped up in my email within minutes of each other, just the other day.  The first was a slice of Judeo-Christian quackery from a student organization called Christians United for Israel. 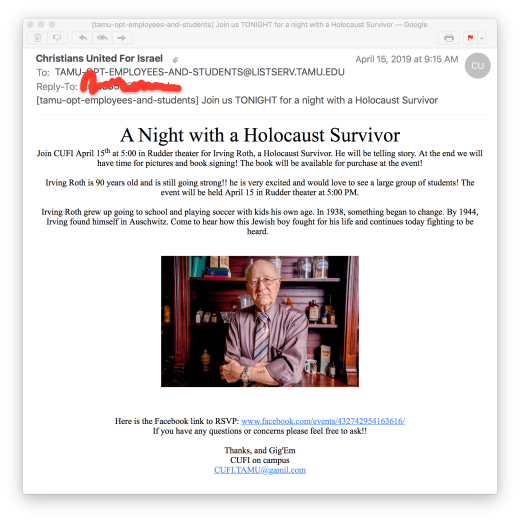 The second was a slab of Judeo-Islamist footsie from a professor in the Philosophy Department.  Put these two announcements together, and you will begin to see what the Judeo-Christian basis of Western Civilization might possibly be.

36 thoughts on “You Scratch My Back, I’ll Stab Yours”