Julius Evola (1898 – 1974), The Bow and the Club (in Italian, 1968; English translation by Sergio Knipe, 2018): Julius Evola gained notoriety with his Revolt Against the Modern World (1934), a trenchant book as apposite to the current phase of modernity in the 2020s as it was to the inter-war phase in whose midst it appeared.  Men among the Ruins (1953) and Ride the Tiger (1961) carried forward the analyses and conclusions of Revolt.  Evola’s authorship looms large, encompassing works major and minor.  A late entry in Evola’s bibliography, The Bow and the Club, which perhaps qualifies only as a minor one, anthologizes nineteen independent essays from the 1950s through the 1960s, rewriting them with some cross-references, so as to lend unity to their collocation.  “The Psychoanalysis of Skiing” illustrates Evola’s acumen in cultural analysis: Diversion although trivial can testify to the social condition and to the pervasive attitude.  Evola remarks the recentness of skiing as a popular sport even while casting doubt on its sportive status.  Whereas mountaineering, also recent, requires strength, courage, and skill, skiing, in Evola’s view, simply makes use of gravity.  One emphasizes the ascent – the other the descent.  The skier must, of course, ascend before he descends, but “the problem has been solved by building cableways, chair lifts, and sledge lifts that meet the real interest of skiers by effortlessly taking them up.”  The very mechanization of skiing ranks it, as Evola writes, “among those [activities] most devoid of any relation to the symbols of the previous world-view.”  Evola detects in skiing an essential passivity.  The thrill of the downhill run reflects the general “collapse and downfall” of the modern world, to which the skier gleefully submits.  Evola relates skiing to “naturism,” his word for nudism.  A demon of shamelessness indeed hovers over the piste.  The notorious hot-tubs of the Sierra-Nevada ski lodges, although they post-date Evola’s death, affirm his intuition.

END_OF_DOCUMENT_TOKEN_TO_BE_REPLACED 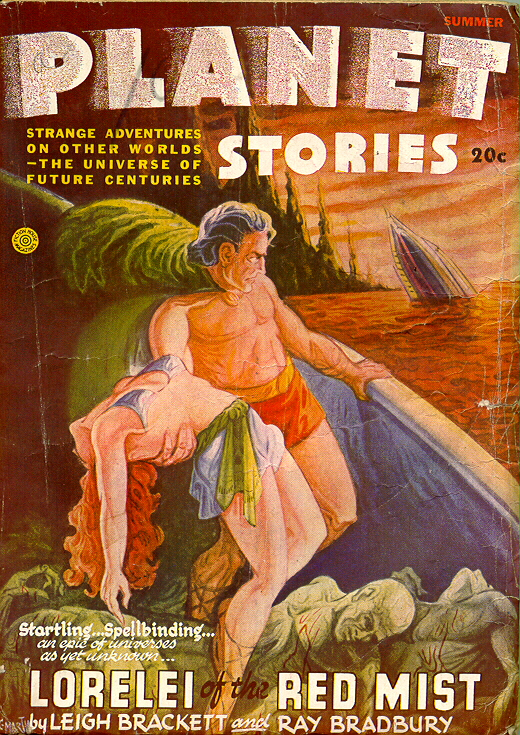 The French remember Leigh Brackett, comme une maitresse “aux space-operas flamboyants,” to quote the words of paperback anthologist Jacques Sadoul.[i]  Stephen Haffner, of the Haffner Press in Royal Oak, Michigan, remembers her, too.  He has invested entrepreneurially in putting the best of her work, her contributions to Planet Stories, back into print in hard covers, after many decades of relegation to the second-hand market, in an act of genuine devotion.[ii]  Otherwise, like many others, Brackett runs the risk of vanishing into oblivion – for that is where all matter goes that is printed on the cheap, acid-rich paper that gave its name to the eminently perishable pulps. The slightest exposure to moisture crumbles them; sunlight bleaches the covers and makes the pages brittle and prone to disintegrate. Even the paperbacks of the 1950s, 60s, and 70s, which reprinted the authors of the pulp era, including Brackett, must sooner or later suffer the same fate as the fragile magazines. Efforts of aficionados to preserve vintage genre fiction in an enduring form express a proper devotion to a robust literary past that looms over an insipid contemporaneity.  These efforts also qualify themselves as implicit, but strong, judgments on the present.  What accounts for Sadoul’s or Haffner’s dedication?  Admirers of elegant prose that manages to evoke lavishly imagined settings, in a style unexpectedly and strongly informed by the Symbolist and Impressionist writers of the fin de siècle, ought to commemorate Brackett (1915 – 1978), who deserves the multiple titles of the True Queen of the Pulps and the undeniable Empress, as it were, of Planet Stories.

In her heyday of the 1940s Brackett’s contribution could be counted on almost invariably to “get the cover,” as the publisher-argot of the time put it.[iii]  Brackett also saw print regularly in the double-columns of Thrilling Wonder Stories, Startling Stories, and Astounding, where again she often “got the cover.”  But it was Planet Stories that heartily encouraged her strong suit of heroic romance in an extraterrestrial setting, usually Mars or Venus, with plentiful action.  Brackett’s stories in that hyperbolically romantic venue set the artistic benchmark for others, and many were the others who imitated her. Brackett’s stories furthermore always inspired the cover-illustrators to their lurid and enthralling best: Who could not have wanted to devour the récit implied by the Planet Stories cover of the Summer 1946 number illustrating Brackett’s Lorelei of the Red Mist?  Ray Bradbury had finished the last third of Lorelei when cinema auteur Howard Hawks invited the saga’s primary author to write dialogue with William Faulkner for The Big Sleep.[iv]  Hawks had read Brackett’s No Good from a Corpse, a hard-boiled detective novel that appeared in 1944.  He wanted its wordsmith for the tough-guy film he was then developing as a vehicle for Humphrey Bogart.  Hawks, assuming the name Leigh to belong to a man, expressed surprise when a slight but athletic woman in her early thirties showed up at his office.[v]

END_OF_DOCUMENT_TOKEN_TO_BE_REPLACED

First and Only Edition of The Elements of Gnosticism

III. Holroyd’s case for Gnosticism remains nevertheless a measured one.  Unlike Pagels, Holroyd’s attitude is not, against Orthodoxy, an angry one.  In Elements, Chapter 1, in setting forth the common propositions of the numerous Gnostic systems, Holroyd remarks that “the idea that the world was the work of an incompetent or malevolent deity” figures among them.  He adds that, “stated thus baldly, it seems a merely perverse idea, or an attempt to exonerate human iniquity by putting the blame on God.”  He immediately tries to downplay the perversity by explaining that the Gnostic systems posit two deities: The inferior Demiurge who, envying the creative potency of the superior deity, authors the botched world; and that selfsame superior deity, sometimes referred to as the Father.  Holroyd notes that the “transcendent God does not, and never did, act, in the sense of willing something and bringing it about.”  Rather than create, as does the God of Genesis, the Father emanates the lower levels of the metacosmic hierarchy in which he dwells, whatever that means.  Thus, to think like the Gnostics, “we have to substitute the idea of divine emanation, or ‘bringing forth,’ for the idea of divine action.”  In Gnostic rhetoric, the Demiurge is the “abortion” of Sophia or Wisdom.  When the Demiurge came forth from Sophia, then, in Holroyd’s words, “he imagined himself to be the absolute God.”  Holroyd makes a good job of conveying to his readership the baroque complexity of the Gnostic myth, with its many levels of divine and demonic beings and its multi-stage causality that brings about the world as men know it.

END_OF_DOCUMENT_TOKEN_TO_BE_REPLACED

If as nominalism supposes there are no objective universals, then there are no objective truths. Then there is no objective reality. There being no objective reality, there can then be no way that one man might understand or speak of reality more truthfully than another. So there can be no such thing as authority. Authority then is ipso facto null, and wherever asserted, is false and unjust. If authority is unjust per se, then justice might be possible only under conditions of anarchy, wherein each man rules his own life absolutely, and is free to make up his mind and shape his acts in whatever way he pleases.

Nominalism carried into practice then is liberalism: the thoroughgoing rejection of authority.

There are many sorts of liberalism: political, economic, grammatical, theological, liturgical, legal, sexual, aesthetic, gastronomical, cultural, architectural, academic, and so forth. All of them are subjects of discussion here, and at other orthospherean sites. All of them have in common the rejection of all authority other than the authority that imposes upon all men the requirement that they reject authority.

The project of authoritatively imposing the rejection of authority is of course incoherent. That doesn’t stop liberals from propagating liberalism. But it does stop liberalism from ever working. 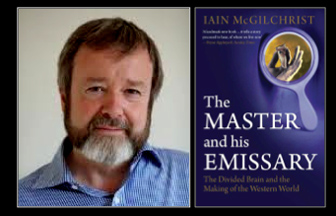 In The Master and His Emissary, Iain McGilchrist writes that a creature like a bird needs two types of consciousness simultaneously. It needs to be able to focus on something specific, such as pecking at food, while it also needs to keep an eye out for predators which requires a more general awareness of environment.

These are quite different activities. The Left Hemisphere (LH) is adapted for a narrow focus. The Right Hemisphere (RH) for the broad. The brains of human beings have the same division of function.

The LH governs the right side of the body, the RH, the left side. With birds, the left eye (RH) looks for predators, the right eye (LH) focuses on food and specifics. Since danger can take many forms and is unpredictable, the RH has to be very open-minded. END_OF_DOCUMENT_TOKEN_TO_BE_REPLACED

To my friend Paul Gottfried, by far the most learned man in my ken, and the uncrowned monarch of the American Right.

Like everything by Georg Wilhelm Friedrich Hegel (1770 – 1831), the Introductory Lectures on Aesthetics require from the reader no little patience.  Originating as actual lectures – which Hegel delivered to his students at Heidelberg between 1820 and 1826 – the posthumous booklet, edited by H. G. Hotho and first issued in 1835, can nevertheless claim the virtue of brevity, and perhaps beyond that a prose-style as close to accessible as its author ever came.  On the one hand then, the reader’s patience will likely reap him a reward; on the other hand, however, the reader might come away from his exertion slightly disappointed.  The science of aesthetics has to do with art, to be sure, and the Introductory Lectures certainly address the topic of art; but art has to do with beauty, and the Lectures, after a sequence of promising paragraphs in the First Lecture, seem as a whole to give rather short shrift to the topic of beauty.  In the second sentence of the First Lecture, for example, Hegel asserts his remit to be “the wide realm of the beautiful,” whose “province,” he adds, “is Art,” or rather “Fine Art.”  Yet this artistic beauty is not to be confused with “beauty in general,” nor with “the beauty of Nature.”  The latter, Hegel insists, counts only as a “lower” type of beauty, a thesis well calculated to offend the Twenty-First Century’s prevailing “Gaian” view of life – the universe – and everything.  Fine art, by contrast, constitutes the higher type of beauty for the important reason, as Hegel puts it, that fine art “is the beauty that is born – born again, that is – of the mind.”  In consideration of the fact that “the mind and its products are higher than nature and its appearances,” it follows that “the beauty of art is higher than the beauty of nature.”

Hegel continues his argument by elaborating a crucial difference: “Even a silly fancy such as may pass through a man’s head,” he writes, “is higher than any product of nature.”  The most fleeting and unserious of mental, or more properly of spiritual, actions participates in freedom and qualifies itself thereby, even though in a trivial degree only, as self-determining.  The appearances of nature share in no such freedom, but, being as they are “absolutely necessary” and yet at the same time “indifferent,” take their meaning only to the degree that they refer to something else.  Hegel offers as his example the sun, whose pleasant usefulness men acknowledge and praise and in whose lavish light the other manifestations of nature appear to them and become useful, but with which they have, and can have, no spiritual traffic.  The sun remains incapable of acknowledging the men who acknowledge it, however much they might enjoy basking in its effulgence.  Nature is the realm of matter — and matter, eternally mute, never communicates with consciousness but only stimulates the suite of sensuous effects with which consciousness is familiar.  Thus for Hegel, the quality of consciousness makes whatever is truly beautiful, beautiful; and it does so both by imbuing matter with the order that originates in consciousness, including the element of freedom, and by placing the material or sensuous part of the art-object into parenthesis, so that the object becomes a pure image in the spectatorial mind just as it was, before its incarnation in the plastic medium, a pure image in its creator’s mind.