END_OF_DOCUMENT_TOKEN_TO_BE_REPLACED

In a few sentences, and with his characteristic penetrating trenchance, Chastek demolishes the Turing Test, and for that matter all arguments from similarity of causal effects; I post here without apology his entire argument, on account of its brevity, precision, and devastation:

One principle of (strong/sci-fi) AI seems to be that what can replicate the effects of intelligence is intelligence, e.g. the Turing test, or the present claim by some philosophers that a Chinese room would be intelligence.

So imagine you rig up a track and trolley to accelerate at 9.8 m/s2. This perfectly replicates the effects of falling, and so is artificial falling. It deserves the name too: you could strap a helmet to the front of your train and drive at a wall 10 feet away, and it will tell you what the helmet would look like if dropped from 10 feet. But for all that the helmet at the front of your train is obviously being pushed and not falling – falling is something bodies do by themselves and being pushed isn’t. The difference is relevant to AI, for just as falling is to being pushed so thinking for oneself is to being a tool, instrument or machine. Both latter are acted on by others, and have the form by which they act in a transient way and not as a principal agent.

END_OF_DOCUMENT_TOKEN_TO_BE_REPLACED

It would seem that the Turing Test fails in principle to test what it wants to test.

END_OF_DOCUMENT_TOKEN_TO_BE_REPLACED

I was listening this afternoon as I drove along to a broadcast on EWTN in which the presenter, Al Kresta, was talking to EWTN host and Catholic psychologist Ray Guarendi about the 3 years he suffered horribly from clinical depression in the early 80’s. His episode of acute depression – for which he was twice hospitalized – was triggered in him by an encounter with a book by an atheist, entitled The Illusion of Immortality. Reading it in preparation for writing a book of his own, Kresta was suddenly overtaken by profound despair. He reflected that the reason the text – which regurgitated arguments he had long before encountered and defeated to his own satisfaction – had such an impact upon him was that the author seemed like a good guy who was simply sincere about his atheism, in a way that most atheists are not.

As Kresta spoke, his offhand phrase “the horror of the atheist notion of reality” hit me really hard. I began almost to weep at the image of that notion, carried through (in the imagination only) to reality – treated, i.e., as if it were really true (as if that could even happen). This feeling, of horrified tears at being perched for the first time in my life at the edge of a precipice that verged upon an abyss of pain without bottom, persisted throughout the conversation between Kresta and Guarendi. I could feel a boundless ontological void opening beneath me, unlike any I had ever suspected.

END_OF_DOCUMENT_TOKEN_TO_BE_REPLACED

A brute fact that is not logically necessary might be otherwise than it is. So it must be caused to be what it is. But qua brute, its causes cannot be ascertained, by any mind. It just is, and – apart from tracing its consequences – there is nothing more about it that might be said.

There is for it then no sufficient reason. It is an incidence of unreason; of chaos.

Despite appearances then, any explanatory scheme that hangs upon any such brute fact is eo ipso unsupported, and must fall.

… is much more problematic than for theists. Which is not saying much: evil is no sort of problem for theists, once the nature of actuality is understood. What is actual must act – it’s right there in the term “actual” – so that if creatures are not able to err and so do evil, they cannot act, and so are not actual. Which is just to say that they are not, period full stop. There are actual creatures, who err, ergo etc. Thus if God was going to create *anything whatsoever,* he had no option in logic but to open the way to error, evil, sin, and death.

So, theists have no Problem with Evil, at least in respect to their theism.

Atheists are not so lucky.

END_OF_DOCUMENT_TOKEN_TO_BE_REPLACED

The Kalam Cosmological Argument is well known: if the cosmos had no beginning, it would not require a creator. Yay, for the atheist! But then, the cosmos would be infinitely old; and, so, it would be impossible for finite events (such as all those that constitute reality insofar as we can apprehend it) to complete the infinite traversal from the infinitely distant past to any moment whatever of the cosmogonic timeline. Zeno would be pleased. There could then be no present moment, for no such present moment could ever yet have happened. Nothing whatsoever could then ever happen. But, tace Zeno, there is always a present moment, events do transpire, ergo etc. The infinity of the past is refuted by the reality of any present event (or any past event, for that matter). The cosmos is therefore temporally finite, had a beginning, so stands in need of an extracosmic cause, and so forth: God, QED.

But there is also an analogous Kalam Ontological Argument. Ontological arguments proceed from a priori premises, that do not at all depend upon a posteriori observation, such as your indisputable observation of this present moment of your experience. They work whether or not there is anything out there to be observed, or anyone to observe it.

END_OF_DOCUMENT_TOKEN_TO_BE_REPLACED

My wife and I are enjoying a short vacation with my in-laws in Jackson Hole, Wyoming. It is a lovely place, rendered sublime along the western edge of the valley by the unearthly majesty of the Grand Tetons. The Tetons seem to the eye of this experienced outdoorsman one of those sublime landscapes in which natural beauty is so intense as to verge on numinous sanctity (other such places I have sojourned: Grand Canyon, Yosemite Valley, the Snæfellsjökull Peninsula in Iceland). Such places command awe, and foster an inward hush. 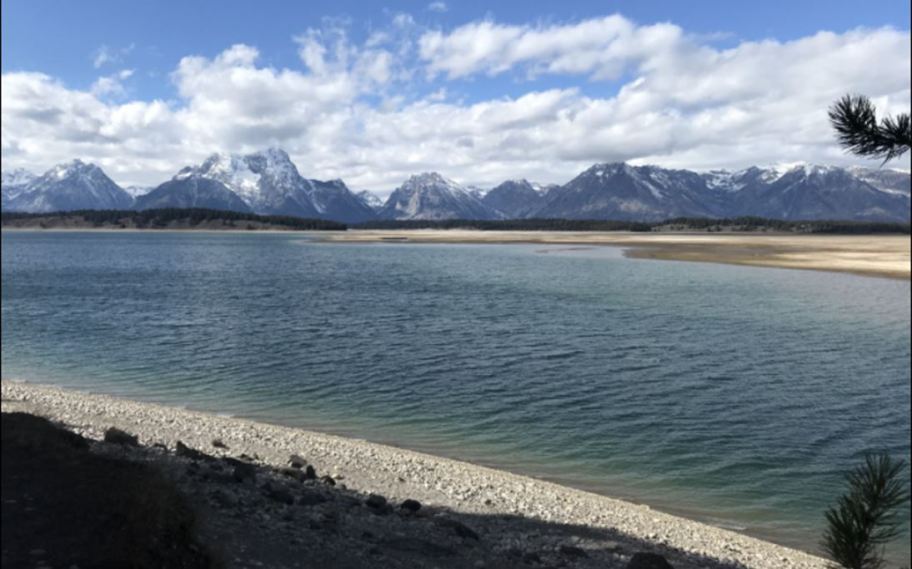 END_OF_DOCUMENT_TOKEN_TO_BE_REPLACED

Bear with me here. I hardly know where I am going with this, although I feel I have caught the spoor of something Tom would find delightful – that he would join with me joyfully in this new hunt. I’m confused because all I have is that spoor, and my spirits are in a hurry and a muddle due to his too soon death. I miss my friend of many years – of too few! I am not yet sure how to do with the world that, henceforth, shall miss him.

Tom has been a valued colleague since we first encountered each other. We corresponded often – not often enough, alas – about our hopes and worries in respect to our work, much of it coordinate here. We sometimes asked each other for editorial advice upon that work. I could rely on Tom for sound counsel. I hardly know how I shall manage without his sagacity.

But I must. I bid you all help me in that project, in which we may hope we can all together proceed for many more years to come. That would be a fitting legacy of his penetrant honest cheerful mind.

I propose that this essay be an early installment in something like a festschrift for Tom. Let us all try to limn what it was that he taught us. Perhaps we might make a book out of it. Or maybe just something on the scale of an issue of Amazing Stories, circa 1935: the sort of thing that was an important source of grist for the mill of his wits. That would please him, perhaps above all things we might do to honor him.

END_OF_DOCUMENT_TOKEN_TO_BE_REPLACED

Twenty years or more ago someone I care about gave me a couple 3D wooden puzzles. I forget how I got them, or from whom, but I remember I care about them. So I kept them on a shelf in my study. Here is one of them, disassembled: 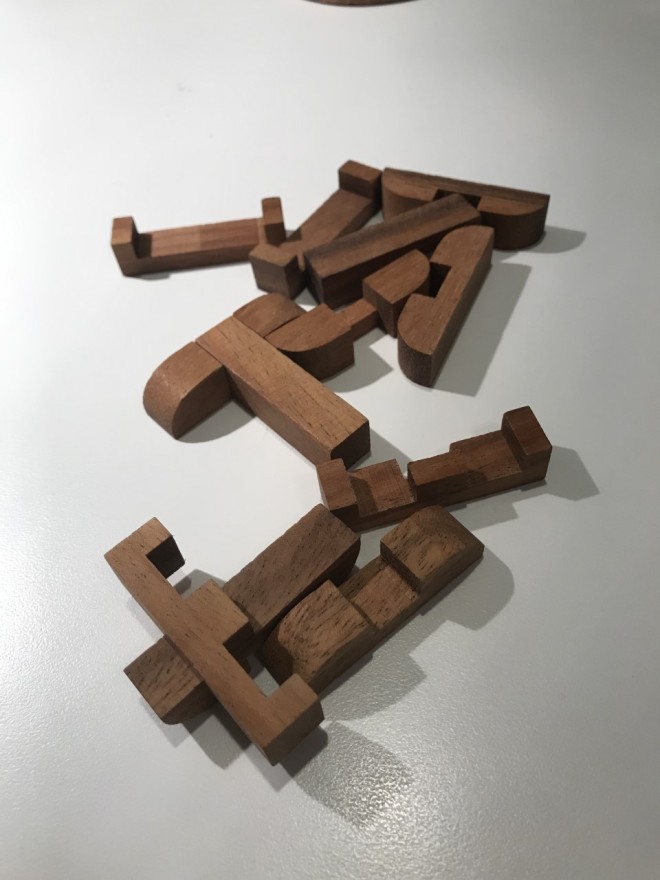 Here is the other, ordered on exactly the same principles, assembled: