Beauty is communal.[1] We know what beautiful architecture looks like. Tourists travel from all over the world to see the buildings of Italy, the Baptistry in Florence, the Roman Coliseum, and the cathedrals of France. Or, maybe the fanciful towers of Neuschwanstein Castle. Likewise, Western tourists will go to see Hindu temples in India, or the Taj Mahal, and Buddhist temples in Thailand. The connection between religion and beauty is also significant. A beautiful environment creates a shared place to live that embodies qualities that can be experienced as “home.” Poundbury is a self-consciously created town in England that employs traditional house 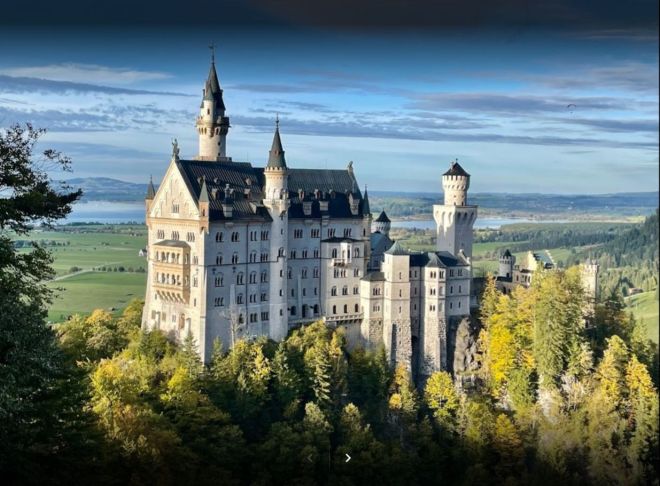 designs that most people actively like and enjoy. Liberals correctly see Poundbury as an attack on their individualist mindset and reject it. Individualism is antisocial and thus eschews orderly and beautiful neighborhoods with concordant matching architectural styles that embody group-selected values such as harmony. Instead, they opt for intentional ugliness; either overtly anti-human ugly square boxes, or bizarre monstrosities that represent “originality,” not beauty. Truth, beauty and goodness converge with cross-cultural agreement. There is no Spanish physics and Inuit physics. The same is true of philosophical truths. There are thousands of ways of being wrong, of missing the target, and only one way of being right. Originality is far easier when being wrong or creating something ugly. No talent or intelligence is required for either. Any of us can do it. The only requirement is gall. How impervious are you to social embarrassment? The charlatan who simply stares down his detractors with a sociopathic unblinking stare. 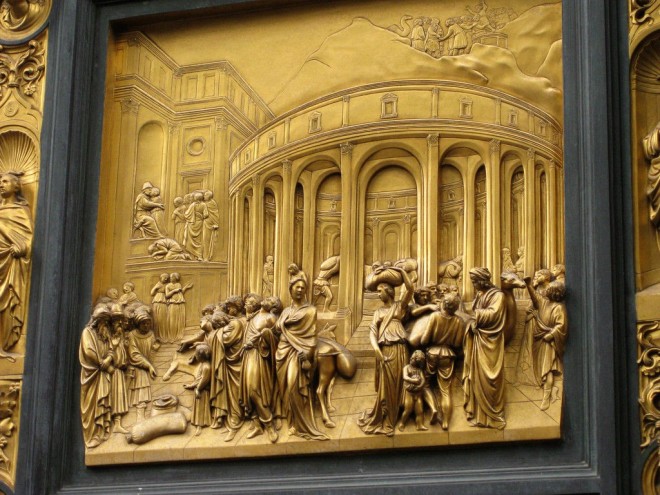 “Beauty is in the eye of the beholder,” an idea of astonishing ubiquity in the US, is largely individualist hogwash. However, it is true in one regard. Opposite sex faces that have been digitally altered to look more like our own are attractive to us. Reproducing with such a person would mean passing on something closer to our own genes, and couples do indeed tend to resemble each other in countless ways, including physically.

We know empirically that being religious, conservative, and ethnocentric is moderately associated with high mental and physical health, good looks, and pro-social qualities like high agreeableness and high conscientiousness. We have evolved to have these qualities because people and societies that do not have these qualities have an evolutionary mismatch for their environment – if the environment is moderately harsh, but reasonably predictable.

Ethnocentrism means caring about members of your community to whom one is genetically related, and being willing to fight invaders. It stands to reason that communities that do not exhibit a preference for their own culture and traditions will die out and be replaced by more ethnocentric groups. Computer models confirm this.

Thanks to a fairly harsh climate and high child mortality, the English got smarter and smarter, peaking around 1800. However, all this intelligence generated the Industrial Revolution with advances in farming and industry. In time, this also led to medical improvements. Better farming and the wealth created by the Industrial Revolution produced surpluses so that more people had better goods and food. Thus, conditions got easier. Easy conditions produce lower selection pressures for pro-social qualities; intelligence being one of those qualities. Compare the reading difficulty of Charles Dickens, serialized and read by the working class, and modern literature. People do not need to cooperate as much, or think about the future to the same extent, so anti-social tendencies start to become more prevalent, like narcissism and psychopathic traits. This means that individualism starts to emerge – something that would have been selected out in the past. People become less religious because they are less pro-social, less healthy, and because people are more religious when under stress and when mortality-salience is high. Think of soldiers in foxholes who are being shelled and mortared who are famous for praying to God to spare them. Mortality salience (being very aware that you are going to die) also encourages having children as a means of partial self-preservation.

Anti-social, atheistic, and stupid individuals are an evolutionary mismatch. So is very high intelligence at this point, especially among educated women who are largely foregoing children. An evolutionary mismatch produces dysphoria (a profound sense of unease or dissatisfaction, the opposite of euphoria). People feel connected neither to other people, nor to God. Worshipping a moral God reassures people that their lives have meaning, that someone cares whether they live or die, and that eternal values exist. Such thinking also encourages people to have children – since children live on into the future. Spiteful mutants are people who are actively hostile to their own culture, to their community, and to having children. In fact, with liberals, the more exotic a culture is; the further away it is from their own, the more they like it. Multiculturalism means the self-murder of a culture. The cosmopolitan ideal is even logically impossible. Where all cultures are cosmopolitan with exactly the same admixtures of cultures, then they are all a big homogenous blob. There are no different cultures to add diversity. Diversity is achieved through differences generated by ethnocentric preferences for your own culture.

When spiteful mutants have influence, it is sufficient for them to represent twenty percent of the population to tip the culture from prosocial qualities to antisocial. Smart people see the writing on the wall and are the most environmentally sensitive. They will see what beliefs they need to have for career and social advancement and can force themselves to believe the new pathological nonsense. This can be described as self-brainwashing. Particularly since the 1960s, American culture has embraced extreme individualism. Paradoxically, this is coupled with egalitarianism which sounds like individualism’s opposite. Egalitarianism is the idea that each one of us is of equal value because we are all the same, which really would mean that none of us have any special value. We would all be interchangeable and thus replaceable. Under egalitarianism, any recognition that someone is better looking, smarter, more athletic, more moral, means that not every individual has the same value. So, we pretend these things do not exist. This generates resentment because when someone who is smarter, more prosocial, and harder working than you achieves something you have not, it must be because he has an unfair advantage. It cannot be because he is better than you. 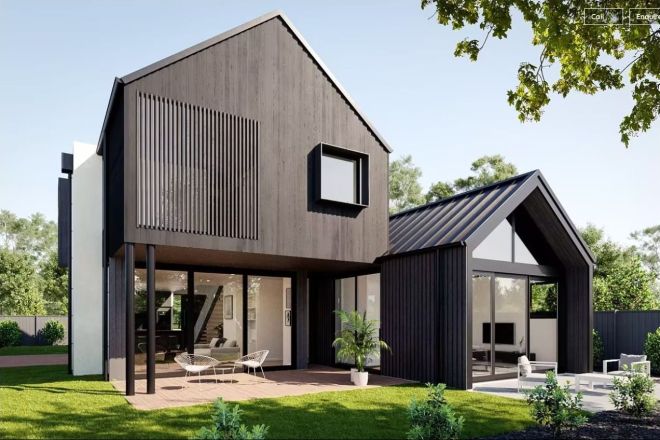 1 million dollar home in the fanciest suburb in Christchurch. Quite typically, it looks like it was designed by a 2 year old with a ruler.

A college degree used to be a sign of higher intelligence and give people an advantage in the workplace. It no longer serves this function when nearly everyone has one. Similarly, Oxford and Cambridge are becoming more Woke. They used to be where the rich and high status go. When they stop going, thanks to policies excluding white conservative people, those institutions will also lose their attraction. When they become the province of “chavs” (antisocial working class men wearing chains and tracksuits), or their equivalent, then their status will be lost. The process could be compared with what happens with terms like “retarded.” “Retarded” literally just means slowed or delayed in development. It then gets used as a pejorative term for things that are not as good or which are seen as stupid. The word then gets banned because it reflects negative attitudes towards the retarded, so a euphemism is created. “Mentally challenged,” or “special.” These new words then come to have the same negative associations and a new euphemism is generated, like “differently abled.” It can never be high status to be stupider than nearly everyone else, and so the old connotations quickly return.

Despite supposed egalitarian ideals that are consistent with our nature as pack animals, we have a drive to rise to the top of the pack in order to make passing on our genes more likely. Those with no such impulse will be selected out. Women, as a group, simply refuse to marry lower status males and this tendency is impervious to ideology. Higher status is achieved, paradoxically, by signaling how egalitarian and Woke you are. Since white people are an offense against egalitarianism by being too successful – though their “success” is actually lower than Asians and Jews – they can be actively hated and discriminated against with impunity. White people can use people of different ethnicities, out-groups, to attack each other and climb the hierarchy that continues to exist.

Students have been told that a degree entitles them to a high-status job. When this does not happen, students become extremely resentful and embittered. Meanwhile, the cost of hiring skilled workers like contractors, appliance repair, plumbers, electricians, and car mechanics had gone up due to a shortage of these people, and, thus, supply and demand. The cost of houses in places like England and New Zealand reflect this shortage, among other things, with the average house price in Auckland, New Zealand being one million NZ dollars. And, New Zealanders earn significantly less money than Americans, both numerically (computer programmers in the US make 106,000 on average, they make about 42,000 in New Zealand) and in earning power. A teacher makes something like 60,000 NZD compared with 70,000 USD here while the cost of living is significantly higher in New Zealand. 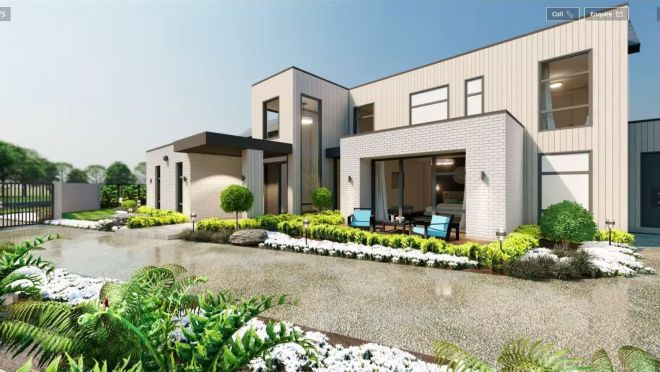 The new individualist/egalitarian ideology means that anything that promotes individuality will be seen as good. Beauty is group-oriented and so is rejected by the antisocial viewpoint. Plus, it introduces hierarchy back into the picture. Working class people are not as smart, on average, as more socioeconomically successful people, and they are not as environmentally sensitive. So, even if a cult of ugliness emerges, working class people will be less aware of the new trend and will also be less able to self-brainwash. They are not as good at impulse control and humans have an instinct and thus impulse to admire and desire beauty.

Also, a two million dollar home. Flat roof, ruler-assisted box design. With all the beauty and grace of a hyena.

Do not imagine this has anything to do with some “new” ideas about beauty. This is a rejection of beauty, which is communal, in favor of difference; of originality, and thus individualism. The uglier and more revolting you can make yourself with piercings, tattoos, and unnatural hair colors, the more enlightened you can make yourself seem. There is a Christchurch, New Zealand, architecture firm called, “We Love Ugly.” They are demonstrating how “right on,” “with it,” and cool they are. The very smart, as has been stated several times, can often convince themselves of just about anything, including that they love ugly things, like brutalism in architecture. In fact, there are Facebook groups devoted to the joys of these ugly buildings, representing successful self-brainwashing. It is quite likely that its members are fairly high IQ. Such perversions actually serve to differentiate them from normal prosocial people in a way that they love. The more confused and revolted people are by their pathological tastes, the more they can feel like the élite. In these topsy-turvy circumstances, a prosocial adaptive attitude to beauty becomes a sign of how benighted someone is and how low on the social pecking order. The richest people in many countries will now build themselves ugly boxes with no character or charm to live in, though secretly decorate them on the inside in a reasonably pleasing manner.

[1] Much of this is derived from the books and podcasts of evolutionary psychologist, Ed Dutton.