“Look! His fist is e’en clenched in the Communist salute!”

Guy Gilpatric, The Man with the Walrus Mustache (1939)

The raised fist is a primitive gesture of menace that even many animals understand.  Indeed apes raise their fists to threaten violence, so the raised fist is a natural symbol with which to threaten violent revolution.  When brandished by communists, black panthers, feminists, or the organizers of a Latinx graduation ceremony, a raised fist expresses hatred of the system and an intention to smash that system violently, ruthlessly, and with all the righteous fury of revenge.

I know the complaint grows tiresome, but there is another ideological salute, nowadays all but impotent, for the display of which a student organization would be severely censured and very likely forcibly disbanded.  This suppression would be justified as protecting the feelings of students who are, or at least say they are, frightened by this other ideological salute.

But who, I ask, is threatened by this raised clenched fist?  A fist is, after all, raised and clenched to strike a blow.  And those who are about to feel that blow are, or at least ought to be, frightened by that raised, clenched fist.  Oddly, by which I of course mean predictably, the text that accompanied this image declares that the Latinx Graduation Ceremony is open to all and inclusive.

Then at whom, I wonder, is that clenched fist being raised.

Loyal readers will recall that I was last year dunked in hot water for writing on this website that there is no reason to suppose that Matthew Gaines, once a State Senator of Texas, was a “key figure,” or even “instrumental,” in the foundation of Texas A&M University.  I have since discovered more evidence that Senator Gaines did nothing but vote with a large majority to accept the Federal money on which the land grant university was founded.  When I noted this fact on this private website last year, I was accused of effectively shaking a clenched fist under the noses of the fabulists who propagate the Matthew Gaines myth, and I was consequently subjected to a very disagreeable Title 9 investigation.

At the time of my ordeal, the champions of academic freedom were, alas, otherwise engaged. 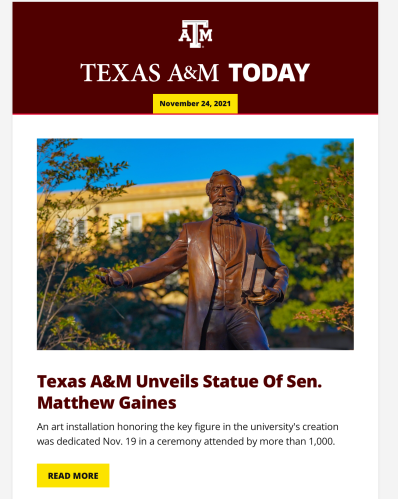 I was told just the other day that these champions of academic freedom have arisen from their slumbers and are now defending, in a manner that reminds many of Horatius at the bridge, a professor in liberal arts who was recently dunked in hot water because he attempted to edify his students with photographs by Robert Mapplethorpe.  I do not know that these were Mapplethorpe’s notorious photographs of bullwhip handles inserted into distended anuses, but the photographs did trigger some narrow-minded students who failed to see their relevance to the study of English literature.

We shall see, but it appears that the champions of academic freedom believe that this liberty was established to distend the minds of narrow-minded students.

4 thoughts on “The Clenched Fist”