If I covet the apples on your apple tree, it would be, in a postmodern sense, correct for me to explain your possession of that apple tree as the consequence of your grandfather stealing that apple tree from my grandfather.  This theory is “true” because it permits me to act decisively and with assurance, because justifies me in taking what it tells me are really my apples.

In the postmodern lingo, a theory that works to my advantage in this way is “my truth.”

Thus, postmodern theory follows the pragmatic principle that the truth is “what works.”  A true theory is “helpful,” a false theory “unhelpful.”  You know you are in the presence of this pragmatic epistemology whenever you hear someone talking about the “consequences” of holding a belief, or when a theory is denounced as “dangerous.”

And they are correct.  Theories are dangerous.  The only question to ask of any particular theory is, dangerous for what, or to whom?

“Critical theory” means theory that is dangerous to the enemies of the “critics” who propound the theory.  Feminism is, for instance, the critical theory of women who hate manliness and seek to destroy it.  We can see its deadly effect in the men it has unmanned.  They are now dominated by women and ashamed that they once were not.  A critic is properly a judge, but a postmodern critic is what they used to call a hanging judge.  And theory is his (or her) rope.

“Critical race theory” is, therefore, the rope with which non-whites propose to take their revenge on whites.  Actually, it is the rope and the strong corn liquor with which they propose to whip up their courage and get in the mood.  This is why “storytelling” is central to CRT.  And what is a story?  It is an explanation of why things are the way they are.  And what is a true story?  It is an explanation that justifies me stringing you up in that tree.  And we might say it is an even truer story if it persuades you to stand still and apologize as I put the rope around your neck.

In a postmodern world of weaponized critical theory, we must plug our ears to the strange tales of our enemies, and listen instead to our own stories.  Our stories should not traduce our enemies, since part of our story must be that we are men who do not live by lies.  But our stories must also give us the courage to defy those by whom we are traduced.  And the first step in defiance is to snap our fingers under the nose of every storyteller who tells a story that ends with us standing still and apologizing as they put the ropes around our necks.

The foregoing was provoked by this latest notice of more sinister doings at the Folger Shakespeare Library. 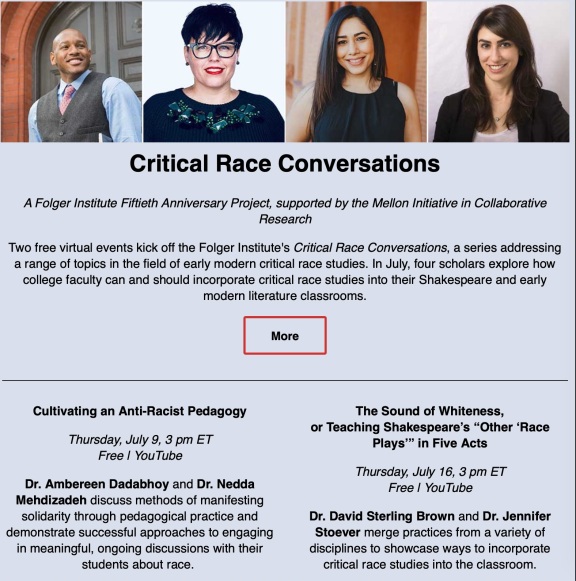 14 thoughts on “Suffer No Strange Tales”