In military circles, proactive behavior is known as a preemptive strike, and all students of history know that most “preemptive strikes” are expressions of paranoia or excuses for aggression.

Rather than wait for our students to be beastly to Chinamen, our OD has been thinking about their being beastly, and so is now proactively scolding them for things they have not done. In the fevered imagination of our OD, every night is a prospective Kristallnacht, and this excuses any amount of preemptive libel, falsehood and aggression.

Here is the poster that the OD mailed out the other day. 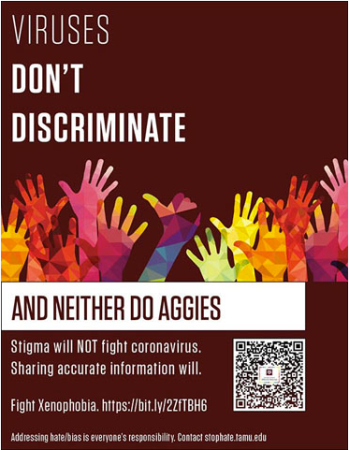 You can see that it begins with a patent falsehood, since viruses do discriminate. The coronavirus, for instance, really has it in for old, fat, wheezy people who live in big cities. And this discriminatory behavior is not just one more thing to hate about viruses, since life itself is discriminatory. Readers of this blog are familiar with the parable of the seeds that were sown on various types of ground, and therefore know it does not end with Jesus telling us, “they all sprouted, and grew, and bore fruit all alike.”

I believe those outstretched hands are meant to represent coronavirus victims slowly suffocating in their hospital beds. I can almost hear the gasping and gurgling. But in the midst of this piteous scene, you see that one hand has been raised in the dauntless, thumbs-up, “gig-em” sign of the Aggies. I take this to mean. “don’t worry about me. It’s true that I am slowly suffocating in a hospital bed, but rest assured that I don’t hate anyone. I don’t hate anyone because:

Which, if true, would seem to render this poster otiose.

From here the poster proceeds to yet another falsehood. A stigma is a mark. Originally it was a mark made by a pointed stick or rod, which is why marks resembling the puncture wounds of Christ are called stigmata. Modern usage has corrupted this word and says that a stigma is not a mark, but rather the meaning attached to a mark. Moreover, it tells us that a stigma is a false and hateful meaning, such as your inference that I am drunk when my behavior is marked by staggering, lechery and slurring of speech.

Back in March and April, it would therefore have been prudent to fight coronavirus by shunning the company of people recently returned from China. Because Chinamen were then, as always, more likely to visit China, and therefore to have recently returned from China, it would therefore have been prudent to shun the company of Chinamen. Drawing valid inferences from outward marks is not hate—it is what we call sentience.

At last we come to the exhortation to “Fight Xenophobia.” To fight xenophobia is to shame people who took to heart their mothers’ injunction not to talk to strangers. Now the reason mothers tell their children not to talk to (i.e. trust) strangers is that children do not understand the marks—the stigma—of strange men and women. They do not, for example, understand what it means when a strange man offers them candy, or invite them to sit on his lap, or to ride in his car. When they grow up, they will learn the meaning of these marks in their own society, and they will (like the prudent virus) discriminate accordingly.  And they will also learn the meaning of the mark of the stranger, the foreigner, the alien, the outlander.

11 thoughts on “With Strangers at your Gate”