“Faustian man has become the slave of his creation . . . . The arrangements of life as he lives it have been driven by the machine onto a path where there is no standing still and no turning back.”

Here is one of the photographs. 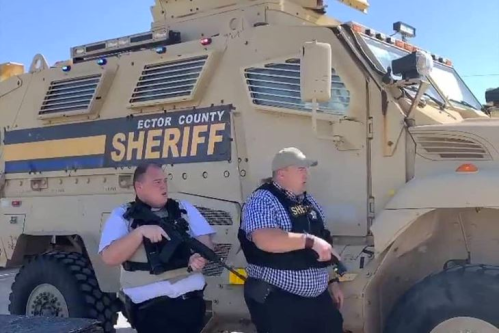 The first thing one notices is, of course, the paunch of the commandos. I do not say this in mockery. Gluttony invites mockery because it is the most conspicuous sin. And gluttony is, I’m afraid, especially conspicuous in the lower classes because their gustatory excesses are excesses of quantity, not quality. But overeating is not more sinful than overnice eating, for the gourmand and gourmet are afflicted with the same spiritual disease.

“Their various cares in one great point combine
The business of their lives—that is to dine.”*

Gluttony is a spiritual disease because, as the poet tells us, excesses in one facet of life require delinquency in all its other facets. A man who makes eating the business of his life must squander his time, money and cerebration on eating, and consequently slight and neglect all his other business. I will turn this into an aphorism and say,

But as I said, I have not set fingertips to keyboard to mock the obesity of the American proletariat. A high-class gourmet also squanders time, money and cerebration on the pleasures of the table, and, as a moral delinquent, differs from the gourmand only in the fact that he is

I have set my fingers to keyboard to remark that our sweet land of liberty appears to have become the sweet land of gluttony, with gourmands and gourmets chowing down, ad libitum, from sea to shining sea. Indeed it appears we have become Joseph Hall’s Crapulia, the fabled land of Inebriate Excess, where “the men are thick and fat to a miracle; nor will anyone salute another whose chin does not come to the middle of his breast, and his paunch falls to his knees.”***

The armored personnel carrier behind which these two SWAT deputies are sheltering is, needless to say, far more formidable than the sheltering deputies themselves. Indeed the interest of the photograph lies in the contrast between this fearsome juggernaut and the fearful jackanapes. Again, I do not call these two men jackanapes in mockery, for I suspect that I am a much a jackanapes as they, and I suspect that the same might be said of you.

Rather as a chubby sheriff’s deputy might imagine he is a commando because he rides in a juggernaut.

6 thoughts on “Juggernaut and Jackanapes”