The word pestilence comes from the Latin pestis, and a pestis is an affliction that causes dis-ease.  To ease is, of course, to render less painful or difficult, so that which causes dis-ease has the opposite effect.  Dis-ease is what we suffer whenever some pest makes life hard.

The pest of my epigram is Scylla, a winsome nymph whom the sorceress Circe made into a hideous sea monster.  Bereft of her beauty and infuriated by Circe’s trick, Scylla plunged into the sea and vowed that she would thereafter make herself a tremendous pest by rendering the lives of mariners very hard indeed.  Here she is causing a little dis-ease for Ulysses and his men:

“The swiftest racer of the azure plain
Here fills her sails, and spreads her oars in vain;
Fell Scylla rises, in her furry roars,
At once six mouths expands, at once six men devours.”

Scylla is a tremendous pest, abhorred alike by man and gods, but the pestilence she caused was not entirely of her own making.  Indeed, the myth of Scylla throws light on the great mystery of pests and proposes that sorcery and enchantments are at the root of all evil.

The myth begins with Scylla, who as I said was once a winsome nymph.  Like many a winsome nymph before her, Scylla was one day strolling on the beach, clad in nothing but her natural loveliness.  It was then that Glaucus, a merman, swam up and got an eyeful of her loveliness.  Smitten by Scylla, Glaucus invited the nymph to join him in his submarine bower of bliss.  Unsmitten by Glaucus, Scylla told the scaly old merman to shove off.

And it was at this point that the evil was born.  Rather than accept Scylla’s rejection and swim away, Glaucus resolved to seize the love of the winsome nymph.  In other words, Glaucus resolved to violate the eternal law that love can only be given.  To achieve his diabolic end, Glaucus turned to the sorceress Circe and persuaded her to brew a potion that would enchant Scylla and place her under his power.  Thus, Glaucus attempted to use sorcery to do what the eternal law forbids, which is to seize what must be given.

To make matters worse, Circe took a fancy to Glaucus, scaly old merman that he was, and so resolved to seize his love by destroying poor Scylla’s loveliness.  To achieve her diabolic end, Circe did not brew a love potion, but instead a love poison that would destroy poor Scylla’s loveliness.  Unknowing Glaucus emptied this love poison into a seaside pool where the lovely Scylla bathed, and upon rising from her bath the nymph found her loveliness transformed into hideous monstrosity.  Appalled and enraged, Scylla plunged into the sea, and the rest, as they say, is history.

“Six horrid necks she rears, and six terrific heads;
Her jaws grin dreadful with three rows of teeth;
Jaggy they stand, the gaping den of death;
Her parts obscene the raging billows hide;
Her bosom terribly o’erlooks the tide. 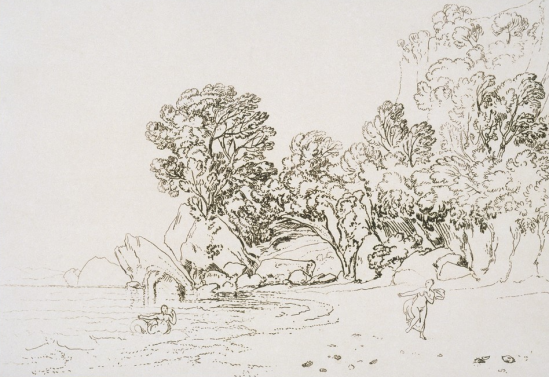 The Germanic equivalent to pest is bane.  The root word means killer, murderer or destroyer.  Readers of Tolkein will recall that the Ring of Power was known to men of the north as Isildur’s Bane, because Isildur “was betrayed by it to his death.”  Like the word pest, we have greatly attenuated the gravity of this word bane, and now call a mere irritant the “bane of our existence” (unless we call it a pest).

I can only suppose I will be dumbstruck, because I never supposed this world contained real pests and banes, and certainly none that would come for me.

Travelling on the road to Jerusalem in the fall of 1832, Alphonse de Lamartine met a man who worked as a physician.  Except when the pestilence was abroad, that is.

“‘In times of plague,’ said he to me, ‘I am no longer a physician; I am acquainted with but one remedy for it—to get away quick enough, to go far enough, and to remain long enough, to prevent the disease reaching you.”*

You may be shocked by this turncoat medic, but none of us know how brave we will be until we are put to the test.  And I dare say all of us expect more self-sacrifice from others than we expect from ourselves.

A few days later, Lamartine was a guest at the Monastery of St. John in the Wilderness, which lay just outside Jerusalem, and was then the only source of wine in all Judea.  The monastery served as a hospice for Christian pilgrims, and as a mission to the Mohammedan hosts.

“After supper, we accompanied them to the terrace of the monastery; it is the habitual promenade of the monks in times of plague, and they frequently remain thus shut up for several months of the year.  ‘But,’ said they to us, ‘this seclusion is less painful than you may think, for it gives us the right of shutting our gates to the Arabs of the country, who torment us at all other times with their visits and demands.’”

I daresay many people presently under lockdown are discovering what the monks of St. John in the Wilderness had learned about times of plague.  It is an ill wind that blows no good, and one sort of pest will very often remove another.  I am struck by the phrase “right of shutting our gates,” for this is a special right that comes in times of plague, and this is a right that many of us wish we more often had.

Provided we are promenading on the terrace of a gated monastery, of course

In his Journal of the Plague Year (1722), Daniel Defoe tells us that, during the terrible “visitation” of 1665, the people of London were at first very energetic in their response to the pestilence.  They were hauling wagonloads of corpses to the cemetery, to be sure, but the pestilence was exciting to everyone who was not dying, and the healthy were cheered by their own bustling and busyness.  But as the novelty waned and it became clear that their bustling busyness had done nothing to stem the destruction, activity yielded to despondency, cheer yielded to despair.

“The plague . . . came at last to such violence that the people sat still looking at one another, and seemed quite abandoned to despair . . . . People began to give themselves up to their fears, and to think that all regulations and methods were in vain, and that there was nothing to be hoped for but a universal desolation.”

We humans are prone to be cheered by the thought that we are doing something.  It little matters what we are doing.  Alarm is assuaged by frantic activity and bustling busyness.  I understand this is why midwives would tell anxious husbands to tear sheets and boil water.  I suspect it is why many are right now hoarding toilet paper.

7 thoughts on “On Pests”