Berdyaev comments that the tragic condition of man results from our dual nature; the physical and divine. Being made in the image of God means participating in the mystery of Freedom, emerging from the causeless Ungrund. We are infinite beings living in a finite universe. It is precisely this fact that constitutes the Fall of man. And it is why we humans will never be thoroughly happy, with brief exceptions, so long as we may live. The release of death offers some prospect, at least, of future happiness. Perhaps a purely natural organism living out its life in a material universe could be expected to make some perfect adjustment to life circumstances, but this prospect is unattractive. Natural man following natural law, natural reason, and natural morals would be incapable of conceiving of anything higher, of anything to aim for, and as such he would no longer be man. The proof that the natural man does not exist is the fact that no man can serenely accommodate himself to such an existence. Even those who might pretend to have so reconciled themselves do so in an act of self-renouncing apparent heroism. It might seem heroic precisely because he has abandoned claim to divinity or aspiration – the ultimate in self-deifying self-sufficiency. But this means he has not abandoned his divine aspirations at all. Heroism itself requires the existence of transcendence.

Immortality as a never-ending earthly existence would be a nightmare. It would mean being damned to the perpetual frustration of spiritual aspirations. Death represents a blessed terminus from spiritual estrangement and a release back into the unlimited divine. Never-ending life on earth would mean the end of man’s dreams of matching the divine within him to the place he resides. Earthly immortality would mean a denial of man’s immortal spiritual nature, trapping him on this plane of existence. It would mean man’s home could only ever be this one. Hope in the life to come offers respite from the blankly objective world that we encounter in those frequent lapses, more common than not, where we prove to be incapable of spiritual and creative openness to the noumenal.

Stranded as we are on a desert island, waiting for a ship to come to our rescue, we can commiserate with our fellow castaways, knowing they share our frustration at the severe limitations of existence. Pity and love for our fellow suffering human is as appropriate as charitable sympathy for a caged animal unnaturally penned up, hoping for release. And those with no hope for resurrection, for a ship to come, are to be particularly cared for. Faith and hope can abandon us all. The worse our situation, the more likely it is. 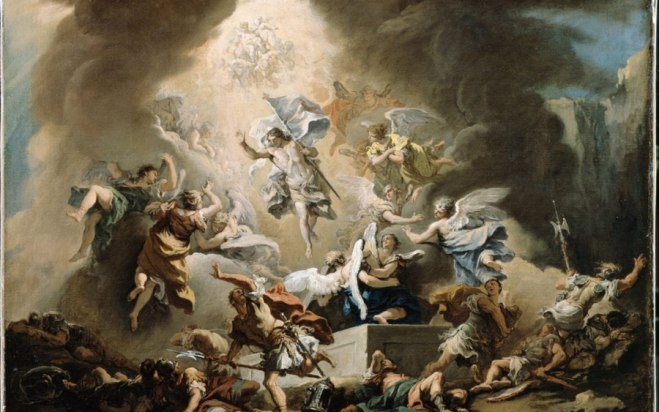 The prospect of experiences on a spiritual plane makes life more bearable. Therefore, woe for those who imagine that they come from nowhere and will cease into nothingness. Some part of them reacts with horror at such a situation. That is the reason that the intellectuals among them rehearse arguments precisely to that effect – that not to have existed is no great curse, so to cease to exist is no bad thing; a purely abstract formulation omitting any role for emotion and will. On the contrary, having come into existence as this precious unrepeatable entity only to be snuffed out as though never having existed would be terrible. Perhaps the naturalist wishes he had never heard of the promise of eternal life, for which he secretly wishes, and thus feels hatred to the deluders of humanity – much as the prisoners in Plato’s cave get angry at the philosopher who describes spiritual realities.

How mean of the theists to offer false hope. The only heaven possible is the one created on this finite earth. Of course, the resulting utopias are all dystopias as we try to pound the infinite into the finite and make of it a single coin. That desire to make a false heaven and an earth-bound utopia is yet again proof of the way in which the human spirit chafes against limitations. No such desire should exist in a contented animal born from the finite and natural, doomed only to sink into the muck after briefly gasping for breath.

The honest and clear-sighted atheist participates in his own kind of tragic view of life. The scientifically obsolete notion of random mutation and natural selection makes of all life randomness and chance. If the career of the animal ceases upon death, then the notion that the meaning of life is whatever you make it unravels. Without hope; without meaning to spiritual aspirations, no sort of profound meaning is possible. Bravely facing the truth entails the notion that bravery is higher than cowardice; that heroism means something; and that truth is something to which to aspire. For truth to be worth pursuing, it must be beautiful and good, and beauty and goodness have no real existence for the naturalist. They must be reducible to atoms and molecules and to the curious firings of neurons resulting in manmade illusions.

The Netflix series Altered Carbon ponders some of these things. As is often the case, the

computer generated and thus biologically inhuman Poe has more humanity than the humans. He has a definite pathos. The humans have managed a pseudo-immortality involving “stacks” – a device that contains the human personality, capturing all experiences too, that is inserted in the base of the skull. The stack can be implanted in a new host body; a “skin.” So long as the stack survives, or there is some other backup file of you, then life continues. The recipients of this boon are all too aware that death might be preferable. The characters notice that each iteration gets worse. Just as humans age through copying errors – physically we are copies of copies of copies – so too the stack/skin synthesis degrades spiritually. A character points out that some memories have a corporeal nature and thus shedding one skin/body for another means losing some of your self. It might be added that if we truly are eternal beings, then this physical face of ours might have some intrinsic connection with our spiritual identity, not to be sloughed off and replaced with another.[1]

Like most popular entertainment, Altered Carbon is tainted with nihilism – though this is tempered by the humanity of the computer-generated Edgar Allan Poe. He seems to feel more than other characters, partly because his existence is particular precarious. The emitter generating him is malfunctioning, causing him to sputter in and out of existence in an alarming fashion. His sense of mortality is thus acute. At one point, the hero, residing in yet another skin, which gives the show the ability to discard actors in the manner of Doctor Who, wants Poe to reboot because Poe is glitching. Poe’s short-term memory is failing which limits his usefulness to the hero and makes of Poe a liability.  Poe points out that since he will lose all the memories that make him him, a reboot would mean death. In an audience alienating manner, the “hero” coldly reiterates that he has no sympathy for this existential situation and expects Poe to reboot for the hero’s maximum expediency. Since Poe is currently his sole companion, conversational partner, guide, access to all computer system information at the literal blink of an eye, and confidant, the hero reveals himself to be pretty soulless, though the hero shows some self-awareness about this. In conversation with an old friend, the hero comments that he is not the man he used to be. Something has been lost in hundreds of years of iterations and multiple skins. This could mean that spiritual existence and physical existence are bound together in some manner. Afterlife existence, if it is not to be the death of the soul in some sort of merger with the One, will mean having a spiritual body and this spiritual body will bear the imprint of the physical earthly mortal body. We are not disembodied minds and we will never so be.

[1] That would have interesting implications for cosmetic plastic surgery.

6 thoughts on “The Tragic Condition of Man”