One evening in early November, 1927, Dr. Harry Hefner Price stood in the old Chapel Hall of Westminster College and addressed a convocation of students, alumni and friends of the institution.  Westminster College sat atop a limestone bluff in Tehuacana, Texas, a town you have never heard of, and the old Chapel Hall was in a handsome three-story building made of stone quarried from that very hill.

I came upon this building quite by accident in the course a recent ramble, and was suitable astonished.  It is not the sort of thing one expects to find upon turning a corner in a tiny and down-at-heels Texas town.

The occasion of Dr. Price’s address was the installation of a new college president, the Rev. Dr. George Olin McMillan, and this installation was fraught with interest because the assembled had seen Westminster “pass through a period of trials and difficulties which many times threatened its very existence.”*  Indeed, three institution of higher learning had taken up the struggle on that hilltop since 1852.  The first failed with the Civil War.  The second moved to San Antonio in 1902.   And the third, Westminster College, had been battling ignorance and the bill collectors for twenty-five years.

Dr. Price had come all the way from Pittsburg, Pennsylvania to deliver this address, and we may suppose he made the journey because he loved Westminster College.  In 1927 he was pastor of Pittsburg’s South Side Methodist Church, but he was a graduate of Westminster, and a former faculty member.  Indeed, the newspaper tells us that there was a time when Dr. Price was the President, Janitor and Gardener of Westminster College, and that he was “at the same time teaching 35 classes a week.”*

Evidently Westminster’s financial problems were not due to deadwood on the payroll.

Dr. Price seems to have been a man of good sense as well as of abundant energy.  The substance of his address was that a college should “develop the fourfold nature of man, moral, mental, physical and religious,” and that “the very bigness of some institutions destroys a real cultural program.”*  He said that the great dangers faced by American higher education are that it is “engaged too much with the mechanics of life,” and that it deals “too much with the mass and not enough with the individual.”*

“I believe one of the great disasters will occur when we standardize our entire education system.  Education will become a machine taking in students at one end and turning them out at the other, all alike.”* 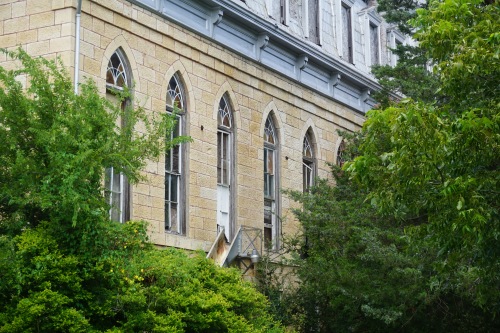 These extraordinary notions may have come to Dr. Price while he was mowing the College lawn, or perhaps sweeping the Chapel Hall floor. He may have been furrowing his brow over the accounts book in the President’s office, or was perhaps taking a sip of water between one of his thirty-five weekly classes.  Whatever the circumstances of their appearance, they seem like eminently sensible notions to me, and I would like to give Dr. Price a minute of silent and belated applause. 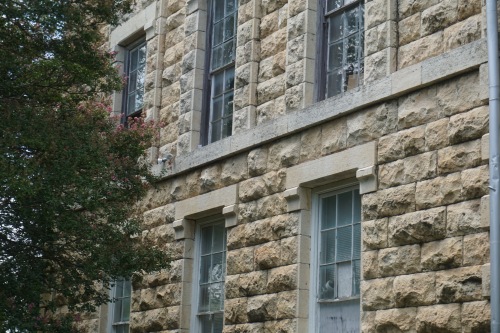 Technological advances have placed Dr. Price’s level of efficiency well beyond the reach of a modern academic.  We are not told the details of Dr. McMillan’s job description, but I fear he may have added a janitor to the staff, or cut his teaching load to thirty classes a week.  Whatever happened, Westminster College was forced to close in 1950.  The stately stone building housed a small Bible college for twenty years, and appears to have been empty since 1970.

So the little College on Tehuacana hill was at last abandoned, rather like Dr. Price’s extraordinary notion that American higher education should be something other than a vast, impersonal and materialist machine.

6 thoughts on “A Little College on a Hill”