“I love the steepled town.”

“At leaving even the most unpleasant people
And places, one keeps looking at the steeple.”

A steeple was in Byron’s day a symbol of the pathos of leave-taking.  Owing to its unrivaled height, a traveler saw this landmark as the last piece of home to drop below the horizon, or to disappear behind a hill.  In my second epigraph, Byron’s hero is standing in the stern of an outbound ship and watching his home-town steeple sink beneath the waves.  As it does, he feels, like many before him, that “partings form a lesson hard to learn.”

Many of our ancestors learned this hard lesson of parting from the steeples of home, but our generation must learn the harder lesson of being parted from steeples.  I mean from steeples generally.  For we have said goodbye to Christian skylines, and must accustom ourselves to life under a profane and unsteepled sky.

Unsteepled is a word, by the way.  Here it is used to good effect by the Christian abolitionist William Wilberforce in 1786. Writing to dissuade a lady friend from going to hear a celebrated preacher in a dissenting meeting house, Wilberforce wrote:

“The increase of Dissenters, which always follow from the institution of unsteepled places of worship, is highly injurious to the interest of religion in the long run” (1).

He allowed that the preaching might be very fine, and the “individual benefits” to those who heard it very real, but insisted that “unsteepled places of worship” were injurious to the interest of religion in the long run because there “are no compensations for the general evils of dissent.”

Some steeples are still with us, of course, but most of these are puny, diffident things.  They are the J. Alfred Prufrocks of ecclesiastical architecture, for like that famous and fictional futilitarian, these steeples seem to stammer,

“Do I dare
Disturb the universe?”

And they would seem to join Prufrock in confessing, 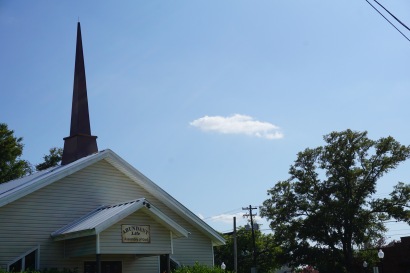 We said goodbye to Christian skylines because bolder steeples did disturb the universe, and the universe hit back.  When it did, the greatness of even the boldest steeples flickered.  Then death, the eternal Footman, snickered.  And before you could say Jack Robinson, those steeples were swarmed, overtopped and obstructed by the profane spires and functional finials of an unholy and banausic civilization. 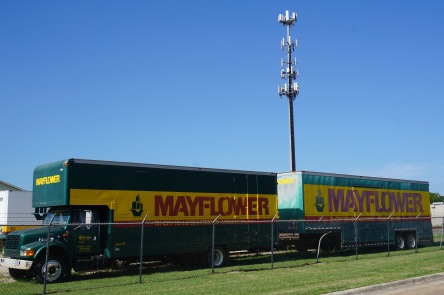 I have not watched my home town recede from the stern of an outbound ship, but there have been no steeples in the rearview mirror of my outbound car.  There have been the onion domes of water towers, and the porcupine quills of broadcast antennae. 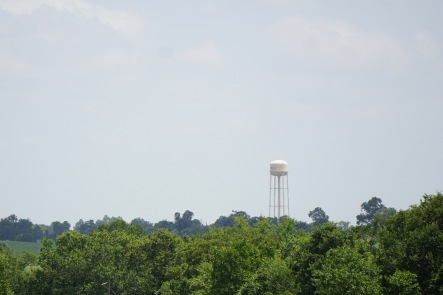 “The most conspicuous object is the steeple, the white spire of which directs you to the wintry luster of the firmament” (2).

“The most conspicuous objects are the great machines by which soil is sluiced down drains, and slogans are slipped into brains.” 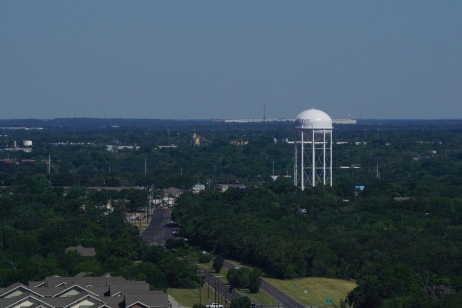 I am as grateful as the next man for drains, and I do not suppose that men can live without slogans, but I see Spengler’s point when I raise my eyes and see naught but the machinery of pipes and wires and struts and stays.  As Spengler put it:

“Man has felt the machine to be devilish, and rightly” (3).

Man has felt the machine to be devilish because he has had an intuition that it marked the gateway to his graveyard.  An old man is a creature of habit.  An old culture is a creature of routines.  And machines are routines made of metal, cement, silicone and other lifeless things.

Time brings every culture to its grave, and on the way there it will

“turn the religious world-picture into a rigid and gloomy system of machinery” (4).

I first began to think about steeples and skylines when I was looking at this panorama of the university where I work.   Drinking the spectacle in, I recalled a line from Thomas Hardy, in which Jude drinks in the spectacle of Oxford. 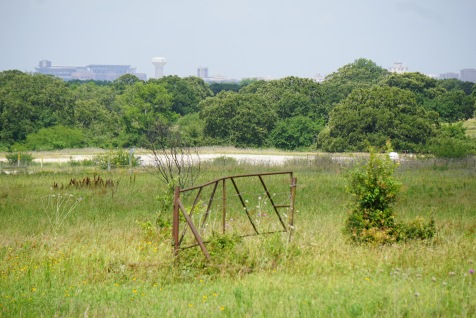 “His gaze travelled on to the varied spires, halls, gables, streets, chapels, gardens, quadrangles . . . of this unrivaled panorama.” (5).

“Heigho, ’twas true and pity;
But there we lads must stay.
Troy was a steepled city,
But Troy was far away.” (6)

Like Troy, our steepled cities fell.  They were brought down by the Spirit of the Machine and the Spirit of the Meeting House, two avatars of materialist modernity.  The first was blind to transcendence, the second pitiless to mere incarnate man.  To the Spirit of the Machine, I am just a pampered farmyard beast.  I and my pen must be hosed down very frequently.  For that the water towers have been raised.  And my simple, sluggish soul must be soothed by silly songs and stimulated by sly slogans.  For that the broadcast antennae have been hoisted to the sky.

To the Spirit of the Meeting House, I am a sort of ghost.  Although many see the protestant meeting house as an old-fashioned relic of bygone days, it is in fact an intensely modern structure that treats men and women as ghosts, or spirits, or disembodied Cartesian minds.  This is why the first Puritan meeting-houses were notoriously indifferent to bodily comfort, and also why they eschewed anything that was lovely or beautiful.  The men who built them allowed nothing on which the heart or the eye might fix, because they believed that lovely and beautiful things were the soil in which idolatry takes root. 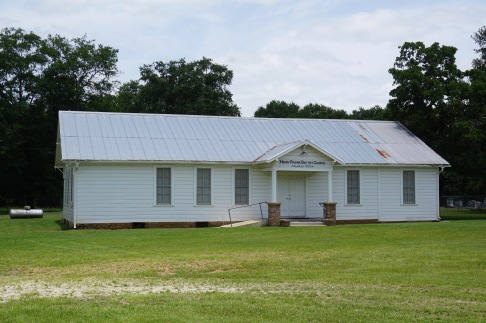 And so, the meeting houses they did build were bare auditoriums or “preaching houses” (7). They embodied what the great church architect Ralph Adams Cram described as “the old Puritan meeting-house prejudice against . . . any architectural features that would differentiate the structure from a lecture hall” (8).

Or a barn, when you come right down to it, since there will be very little difference between a building designed to house ghosts and a building designed to house beasts.  Both are simply boxes that serve to keep miserable, shivering bodies out of the rain.  Puritans listened to preaching in their “preaching houses,” but Quakers, who were so exquisitely ghostly as to suspect even the carnal medium of speech, often did nothing in their meeting houses but sit silently and shiver. 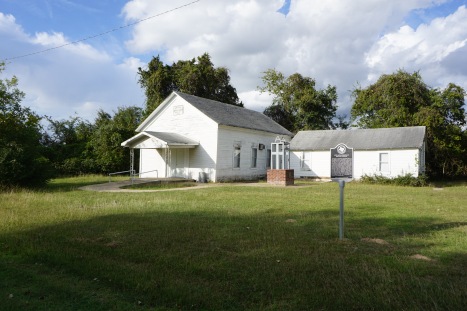 The fear of idolatry destroyed what Cram called the “sacramental philosophy.” This maintained that man is neither beast nor ghost, but that he is instead an incarnate spirit who can experience the divine, but who is also “compelled to see spiritual things through their earthly forms.”  Puritans and Quakers attempted to bypass those earthly forms and enjoy something very close to unmediated contact with the divine (9).  To do this, they acted like ghosts who were merely encumbered with bodies and imprisoned in the material world, and who therefore had no need for the carnal rituals and objects that, in the sacramental philosophy, serve as “channels and embodiments of the divine.”  They certainly had no need for steeples, and indeed scoffed at the absurdity of that they called “steeple houses” (10)

“The inevitable result of the rejection . . . of sacramental philosophy was the severance of matter and spirit; the breaking of the old intimacy and the living union, and the placing of religion and all other spiritual things in one category, of all the material phases of life in another” (11)

When Don Juan stood in the stern of that ship and watched the steeple sink beneath the waves, he learned that “partings form a lesson hard to learn.”  What do you suppose that lesson was?  I suppose it was that parting was more painful than he expected it to be when he resolved to go away.  I suppose it was a hard lesson in frailty, loneliness, and feeling more than a little afraid.  These are, after all, the pathetic impressions that have caused men through the ages to look over their shoulder in the hope of seeing a steeple.  Modern men still learn this hard lesson, but looking over their shoulders find nothing but a profane, unsteepled and mechanical sky

9) “The dominant idea of Puritanism” is that “the relation between the invisible spirit of man and the invisible God was immediate rather than mediate.⁠”  Edward Dowden, Puritan and Anglican: Studies in Literature (1901).

3 thoughts on “Under a Profane Sky”