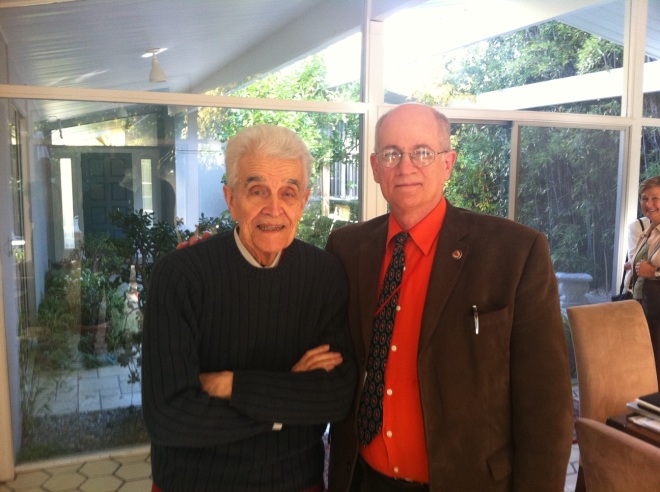 My article on Oswald Spengler and William Olaf Stapledon – Two Eccentric Theorists of the Origin of Language – appears in the current number of Anthropoetics: the Journal of Generative Anthropology. Assuming the framework of Eric Gans’ “scenic” and “evenemential” model of the origin of language, the article examines the convergent intuitions of Spengler and Stapledon that language represents a distinctive break from animal signage rather than a gradual development on the basis of animal signage. Spengler, in his Decline, and Stapledon, in his Last Men in London, agree that language and religion spring into being simultaneously in response to a breakdown of the instinctual order in the proto-human group, a breakdown that is exacerbated by the increasing mimeticism of the individuals who comprise that group. The first sign designates both the group and the emergent consciousness, which what is suddenly a community rather than a mere group perceives as God. The argument also draws on René Girard’s concept of the origin of culture in a “sacrificial crisis,” which provides the starting-point for Gans’ theory.  I reproduce three paragraphs from the article’s Introduction. –

Cognoscenti of Generative Anthropology will have acquainted themselves with the history of language-theory in its broad outline as well as with the narrower history of those investigations of things human that sought plausibly to account for or to characterize, in one way or another, the origin of language and by implication the totality of institutions.  Generative Anthropology is itself a late instance of the latter and its originator Eric L. Gans, in his study of The Scenic Imagination: Originary Thinking from Hobbes to the Present Day (2008), offers a rare and succinct survey of logo- and etho-genetic hypotheses, as one might call them, from the Seventeenth Century down to the Twenty-First.  Gans writes, “My thesis is that human experience, as opposed to that of other animals, is uniquely characterized by scenic events recalled both collectively and individually through representations, the most fundamental of which are the signs of language.”  It belongs to Gans’ thesis that, “If the human is indeed a series of scenic events… then the human must have originated in an event… the representation of which, the first example of language and ‘culture,’ is part of the originary scene itself.”  Gans’ term “originary scene” refers to the logically necessary first occasion when the mutual awareness of the ego and the tu, mediated by an object of contention, articulated itself in a gesture or utterance that, lodging in the newly commenced self-acknowledgment and mental continuity of the group, could be recalled or repeated.  Gans makes his own case for the intuitive likelihood of the originary scene, but there is a simpler argument all the more poignant for originating outside of Generative Anthropology, while lending it logical support.  Every word in every language is a coinage.  Whatever the word, there was a time of its coinage, of its first instance, before which it never existed.  Traveling backward in his time machine, the observer would notice, first, a de-ramification of tongues until, an initial bifurcation into two dialects being annulled, only one tongue existed.  In the case of that tongue, the traveler would then witness a diminution of vocabulary until he arrived at the first, and in its day singular and only word of that tongue’s vocabulary.  He would have arrived at the origin of language.

Gans’ own explanation of logo-genesis importantly supplements the “coinage” argument by explaining why the originary scene, as well as having been evenemential, must also have been scenic – a conspicuous and as it were eruptive occurrence with many witnesses to attest and remember it.  Gans draws on René Girard’s model of a sacrificial crisis as the generator of a primordial institution whose coming-into-existence implies significance hence also the sign or language.  Girard’s sacrificial crisis involves a catastrophic breakdown of animal hierarchy and a concomitant outbreak of novel mimetic rivalry in the group.  The group suddenly finds itself in the proverbial war of all against all, which resolves itself, in Girard’s explanation, through the spontaneous focusing of hostilities on a single more or less arbitrarily selected party, whom the crowd then murders.  In Girard’s model, the singling-out of the victim generates the first sign in the form of the corpse which becomes the central object of the first communal awareness while associating itself both with the preceding violence and the sudden peace of its cessation.  Whereas Girard’s primordial signifier arises through violence, Gans’ primordial signifier arises through – or rather as – the deferral of violence.  In Gans’ originary scene, as in Girard’s, a breakdown of instinct leads to an upsurge of contention – in this case over an appetitive object that everyone would like to consume – but there is a difference.  The allure of the object draws all hands to appropriate it, but the convergence of all those hands engenders fear of violence.  The hands draw back.  “I hypothesize,” Gans writes, “that our originary use of representation creates a ‘sacred’ difference between a significant object and the rest of the universe, insulating it at the center of the scene from the potential violence of the rivalrous desires on the scenic periphery.”

The suspended attempt to grab the object and ingest it becomes, as Gans argues, by its very suspension, an act of designation, in which “through the mediation of the sign, all participants can imaginarily possess the object,” which impresses on the nascent consciousness a domineering numinous quality.  The participants see the object as actively preventing its appropriation in an irresistible way.  The object is for the moment all-powerful.  Insofar as the designation of the object also effectively names the subject, the first sign constitutes the first name such that “the sign that designates the inaccessible center may be called the originary name-of-God.”  The proposition nevertheless requires qualification: “What humanity has from the beginning designated as God is not the object that occupies the center of the circle but the Being of the center itself, which subsists after the destruction of its original inhabitant and whose will, conceived as the force that held the circle and is center in equilibrium at the moment of the emission of the sign, guarantees the sign’s timeless meaning.”  Gans remarks that words resemble gods in remarkable ways, not least in their immortality, but also in their untouchable transcendence; words, like gods, appear to the incipient human awareness to possess a life of their own and to exert a type of glamour.  Think of the Heraclitean Logos, which as its author says does and yet does not wish to be called by the name of Zeus.  The Logos quickens the mind and brings order to what would otherwise be a chaos of raw perception.  To utter any word audibly on any occasion has still today the social effect of calling the attention of others to the speaker, who thereupon becomes, even though but transiently, the center of a passing scene.  All ritual stems from the center-periphery structure of the originary scene, Gans plausibly claims, but also “what we call the imagination” because that “is a mise-en-scène before an implicit audience on a scene of representation internalized within the mind.”

4 thoughts on “The Simultaneous Emergence of Language & Religion”