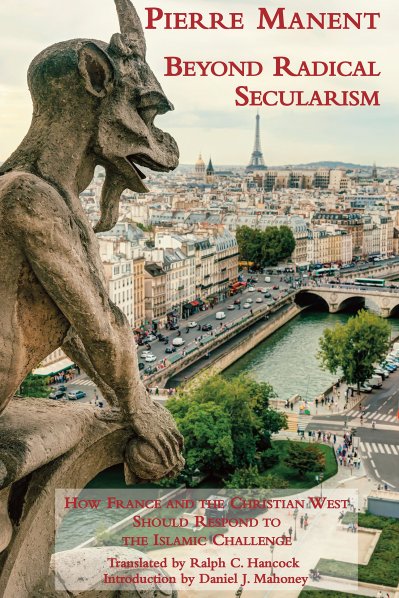 At Gates of Vienna, I review, somewhat belatedly, Pierre Manent’s book Beyond Radical Secularism (2016).  The book carries the subtitle How France and the Christian West Should Respond to the Islamic Challenge. I offer an excerpt. —

What is radical secularism?   Manent defines radical secularism as the opinion, pervasive in modern Europe since the end of World War Two, that views religion merely and strictly “as an individual option, something private, a feeling that is finally incommunicable.”  Manent argues, however, that this opinion is not native to those who hold it, but rather is the result of a propaganda regime in place for many decades.  “The power of this perspective over us,” Manent writes, “is all the greater because it is essentially dictated by our political regime, and because we are good citizens.”  It belongs to the bland conformism of the modern – or postmodern – person that he wishes to participate in such self-lauding phenomena as “enlightenment” and “progress.”  Not even “the acts of war committed in early 2015 in Paris” seem to have shaken that conformism, which confirmed its blandness with a brief rush of emotion followed by a return of the characterless routine.  France finds itself in a state of “paralysis,” Manent concludes.  Its program, from the presidency down through the institutions right to the conformist mass of citizen-individuals appears to be to see nothing and to do nothing.  The Muslim problem exists, according to Manent, because the French state is weak and cannot produce the secularity, which would integrate Muslims, and which it declares as its program.  Whereas “the State of the Third Republic had authority” and “represented that all held sacred,” as Manent argues; “our state [the Fifth Republic] has abandoned its representative ambition and pride, thus losing a good part of its legitimacy in the eyes of citizens.”

Manent continues: “Our state now obeys a principle of indeterminacy and dissipation.”  Indeed, the French state, committed to the European Union, is programmatically self-minimizing.  This trend attaches to another: The rising hostility to and elision of national culture and national identity.  Manent points out that “the work of the state… has tended to deprive education of its content, or empty these contents of what I dare call their imperatively desirable character.”  Under the Third Republic, pride in the achievement of one’s nation – or at the very least, the explicit acknowledgment of those achievements – expressed itself robustly and informed the national curriculum.  The existing curriculum, in the name of multiculturalism, has elbowed the lesson in what it means to inherit the French nation out to the margin of the page or out of the textbook altogether.  “How can we begin from the beginning,” Manent asks, “and gather children together in the competent practice of the French language, when we have done so much to strip this language of its ‘privilege?’”  Given that secularity itself is such an empty concept, how might teachers teach secularism, the primary principle supposedly of the state – say, to Muslim students who crowd France’s urban schools?  One can teach the heritage of a nation, but one finds himself hard-pressed to teach a self-evacuating notion.  “Under the name of secularism we dream of a teaching without content that would effectively prepare children to be members of a formless society in which religions would be dissolved along with everything else.”

5 thoughts on “Beyond Radical Secularism”