This morning a friend sent me this photograph of a bathing beauty contest that was held on Coney Island in 1923.  He commented: “Seems almost innocent.”  I responded: “Almost innocent, not quite.” 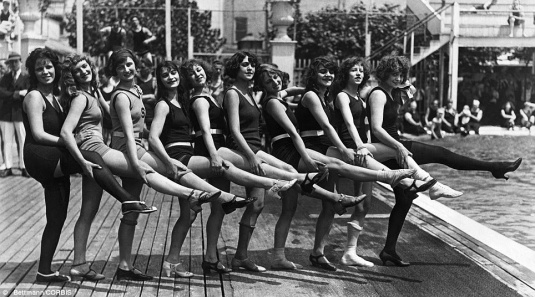 This set me to thinking about the Jazz Age, of which this photograph is an early artifact, and from which we have yet to emerge.  Our understanding of the Jazz Age is hopelessly fuddled because we identify the word jazz too closely with the musical genre that was born in the Jazz Age.  Our fuddling is exacerbated by the fact that the music we now call jazz so little resembles that jazz-age jazz.

“Jazz” was originally a verb, and to jazz something was to excite or liven it up.  Many white Americas probably first encountered the word at baseball games, which were said to be “jazzed” by exciting plays and players.  As a musical term, “jazzed” music was the new and exciting music that livened up disreputable parties and nightclubs with frenetic dances such as the Charleston and the Lindy.

Jazz was, more than anything, danceable music.  Thus in a 1917 article called “The Appeal of Primitive Jazz,” the Literary Digest informed its readers that there was, in Cuba, “a funny music that . . . put little dancing devils in their legs, made their bodies swing and sway . . .”

As this quote suggests, the word jazz came from Africa by way of the Caribbean, where to be jazzed was to be aroused, excited, or moved by “little dancing devils.”  The word was not only connected to music, but was indeed very strongly associated with sexual arousal; in Black slang it was often an exact synonym for what later generations would describe as “turned on.”  A man who felt a powerful need for sexual release was said to be jazzed, and his efforts to excite the same feelings in a woman were called jazzing.

(Think about that the next time the cook tells you he has “jazzed up” the meatloaf!)

Jive is another word of African origin, and it means to inveigle with empty promises, boasts, threats, and flattery.  Jive is what later became known as “trash talk,” since words spoken as jive have little or no value.  This word jive passed into the musical lexicon in the 1940s, when it became the name for the ongoing tradition of danceable jazz music.  Fast swing or “jumping jive” was the direct descendent of the danceable jazz of the Jazz Age.

Unfortunately the name “jazz” passed to its entirely undanceable brother genres of bebop and cool jazz (the one too fast for dancing, the other too slow).  I write unfortunate because this misnaming has obscured the cultural continuity of the Jazz Age.

So by the 1940s, jive was the jazz that “put little dancing devils in their legs.”  In the musical slang of the day, jive “rocked” the audience and the audience “rocked” to jive.  As a musical term, “to rock” at first simply meant to move people out onto the dance floor, and then make them move on the dance floor.   This is because the “rock” in rock music comes from the old German rucchan, which means to move, and has nothing to do with the old French roque, or stone.

Like the verb “to jazz,” the verb “to rock” was also used to denote efforts to break down female chastity in the course of seduction.  Indeed, just about everything that was said against Rock in the 1950s had already been said against jazz in the 1920s.  Here’s the English playwright and novelist Cosmo Hamilton, writing in the Boston Globe in 1926:

“The modern dance craze, petting parties, and joy rides are all due to the Jazz Age.  And the Jazz Age is the effect of primitive music on a so-called civilized state of the world . . .”

Hamilton did not approve of jazz music, but he was enough of a wordsmith to use the word “primitive” in the correct sense of primeval, and not simply as a term of abuse.  The jazz of the Jazz Age was “primitive” because, like mankind’s first music, it was connected to orgiastic dance and Dionysian ecstasy.  Rock music is exactly the same.  Indeed primitive jazzed music has been the music of our civilization (so-called?) for nearly one hundred years.

(I have another essay on the culture of the 1920s called Christers and the Smart Set, which you can read if you click that link).