The code of chivalry fused Christianity and the ethos of the German warrior (1). This is evident in the two rituals by which a man was ordained a knight: the German dubbing, by which his sword was placed in the service of his king, and the Christian vigil, by which it was placed in the service of his God. We must not, of course, mistake the code for the actual conduct of knights, since many of those who rode out cased in iron were simple barbarians. But neither should we dismiss the code as a mere fancy wrought in minstrels’ dreams.

We can see this fusion in The Education of the Children of Clovis, a painting by Sir Lawrence Alma-Tadema (1861). The young princes are learning to throw the ax, under the eye of warriors in the costumes of Roman and Teutonic soldiers, but will shortly repair to lessons with the monk, who is waiting by the loggia, book in hand. 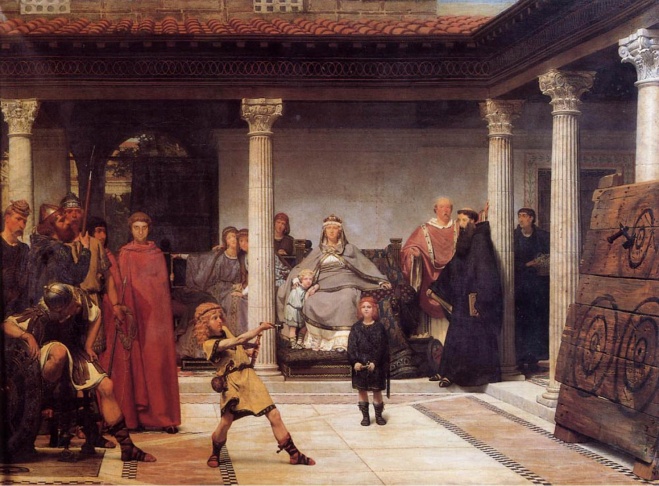 All men of the West have been, in a sense, children of Clovis, and they remain children of Clovis so long as they can throw the ax and take their lessons from monk. This was what Edmund Burke meant when he wrote:

“Nothing is more certain, than that our manners, our civilization, and all the good things . . . in this European world of ours, depended for ages upon two principles: and were indeed the result of both combined; I mean the spirit of the gentleman, and the spirit of religion” (2).

There is, to be sure, a tension in this code of chivalry. Christianity teaches a low regard for earthly pomp, power and prowess, as Nietzsche correctly perceived. Meanwhile, the ethos of the German warrior gives all such things their due regard. It does not hold them in the highest estimation, and distains them as trash when they are stained by dishonor, but it teaches respect for crowns, and for swords, and for mighty blows.

When the code falls out of balance, the West descends into savagery or suicide.

Everyone knows, solicitude for the female sex was at the heart of the code of chivalry. The honor of defending a lady derived from barbarian tradition (see Tacitus), veneration of the Virgin, and the notion that the Church is the “bride of Christ.” Thus, to a chivalrous knight, nothing could be finer than to rescue a damsel in distress while under the admiring eyes (even if only in imagination) of his one and special “lady love.”

As Sir Walter Scott put it:

“The defense of the female sex in general, the regard due to their honor, the subservience paid to their commands, the reverent awe and courtesy, which, in their presence, forbear all unseemly words and actions, were so blended with the institution of chivalry, as to form its very essence” (3).

It is this sweet sentiment that has curdled into what I called, in my previous post, the estrogenic cloud. I would be very long in telling just how this curdling happened, but a short answer would be that the tension in the code of chivalry led to a tear, and when the West was torn, the children of Clovis were no more.

(2) Edmund Burke, Reflections on the Revolution in France (1790)

11 thoughts on “Children of Clovis, Where Art Thou?”